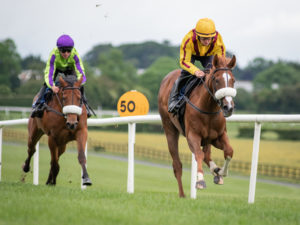 Wednesday the 5th of June saw the renewal of barrier trials at Naas racecourse, having been pioneered at Dundalk stadium last year. Seven Trials were held for unraced two-year-olds and unraced three-year-olds over five, six and seven furlongs.

A wide variety of trainers were represented on Wednesday at Naas including Mick Halford, Jessica Harrington and Ger Lyons. Jockeys riding included Chris Hayes, Colin Keane and Declan McDonogh. Viewing from the Goffs-sponsored owners and trainers facilities were a diverse group of owners, agents, breeders and other interested parties.

Two impressive debutants to win their respective “Trials” will now head for the Goffs London Sale which takes place on the eve of the Royal Ascot meeting. Tinnahalla, a Starspangledbanner colt from Shamrock Bloodstock, and Kingslayer, a son of Footstepsinthesand who will be consigned by Leamore Horses.

The principal aim of the ITM Barrier Trials is to better meet overseas demand for quality unraced horses and the 2018 Trials resulted in several sales.